Work has been underway to replace three of the four main support timbers on the former Oregon Lumber Company water tower at McEwen. The Kinsman Foundation awarded a grant to the Sumpter Valley Railroad to complete these structural repairs, as well as building a protective frost box for the feed pipes and upgrading the pump system to allow for winter operations. The new support timbers were cut on the steam powered sawmill at Antique Powerland in Brooks, Oregon. 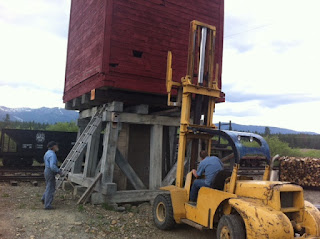 The first of the three cross supports has been replaced. This beam was the most heavily rotted, and also the easiest to remove. The water tower house was lifted by the forklift and then blocked up so the beam could be slid out and the new beam slid in, then the house was set back on the supports. After some minor adjustments the house was bolted to the beam. 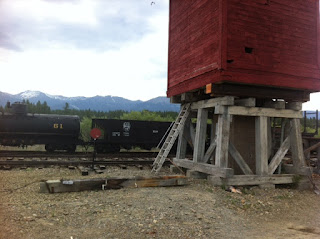 The second beam has been pulled out with the forklift. To remove this beam, not only the house, but the water tank itself had to be lifted slightly for removal and replacement. 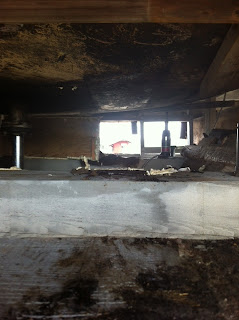 With the second beam out of the way you get a good view not only of the McEwen depot, but also the bottom of the steel tank. Originally the water tank would have been made of redwood staves banded together. Unfortunately when the water tower was relocated to McEwen from Bates, the original tank was found to be completely unusable, though the steel tank bands have been preserved for posterity. 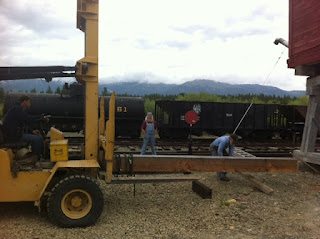 As the forklift can only access the tower from the side, the new beam had to be strapped to a fork and cantelivered into place. 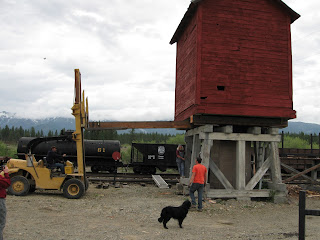 Lining the beam up. 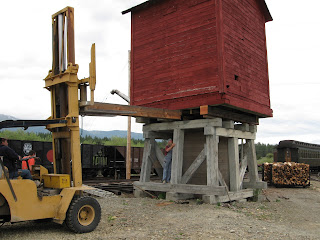 Checking the clearances and making sure there are no obstructions. 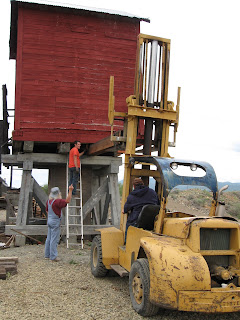 Sliding it into place and making the final adjustments with a sledge hammer. 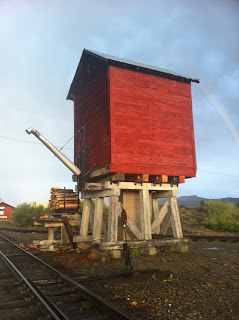 All the beams are in place as well as the new support brackets. Next up on the repair list for the tower is painting the base, some minor structural repair to the tank house, and then a lot of siding repair.
Posted by Sumpter Valley News at 10:53 AM No comments:

Steam Returns to the Valley...

The first train of the year was a small charter on May 7, 2012, but it was a good chance to give Heisler number 3 and coach number 20 a break-in run as both pieces of equipment had received repairs over the winter. 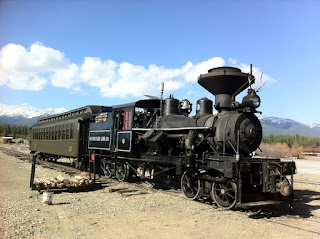 Posted by Sumpter Valley News at 1:20 PM No comments:

On April 28th and 29th the Sumpter Valley Railroad held its annual Safety Weekend and all in attendance agreed that it was one of the best we had held in years. This year focused less on book work and more on the hands on aspect of operations and safety. Attendees were coached in locomotive operations, train handling, routine maintenance and servicing, and even got a chance to familiarize themselves with our switcher locomotive number 110. Breakfast and lunch were provided on both days, Sunday being served by Linda Raney out of the Western Railway Preservation Society's newly refurbished 1883 vintage Denver & Rio Grande Western outfit car number 04951. In addition, the weather was excellent, and much progress was made on minor projects around the yard as well as routine maintenance on the passenger equipment and locomotives.

If you were unable to attend this years Safety Weekend be sure to mark your calendar for next spring as attendance is mandatory for operating crews. CLICK HERE for more information on membership and volunteering.
Posted by Sumpter Valley News at 1:18 PM No comments:

As the Sumpter Valley Railroad is under the regulations of the Federal Railroad Administration (FRA) each year the locomotives must undergo a full hydrostatic test and inspection before entering service. 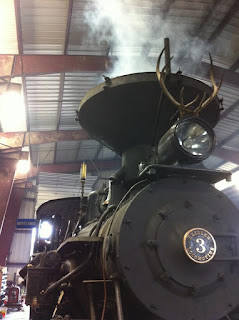 Heisler number 3 has been reassembled and is being warmed up for her annual hydro test and inspection tomorrow. The water in the boiler is heated to between 70 and 100 degrees for a hydro test to relieve stress on the boiler and tubes. 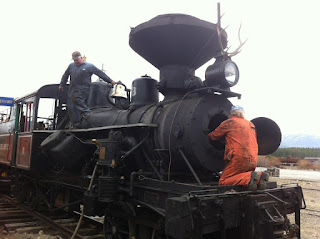 Our CMO Scott Hutton (left) and Road Foreman of Engines Steve Christy (right) are carrying out the hydro test on Heisler number 3. Also assisting but not pictured are Eric Wunz and Taylor Rush. The 97-year old locomotive was pressure tested to 231.25 psi, or 125% of her permitted operating pressure of 185 psi. However though she is certified to a higher pressure, we only run her at 150 psi. It was a good test, no problems to report, number 3 is ready for the summer!
Posted by Sumpter Valley News at 1:16 PM No comments: