Work continues on the former Denver & Rio Grande Western outfit sleeper number 04951. All the framing repairs have been completed and the new siding is going on at a rapid pace. 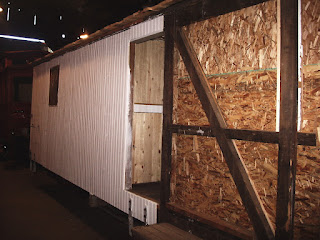 Here you see the original boxcar framing and the new interior sub-wall prior to the insulation and moisture barrier being installed. The interior is also being redone as well with tongue and groove going over the strand board sub. 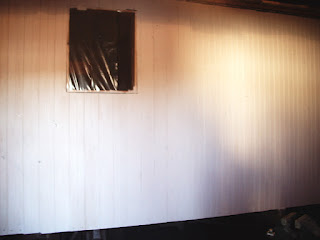 Another coat of primer and the siding will be ready for paint. The 04951 will carry the earlier boxcar red with white lettering scheme as opposed to the later grey with black lettering. 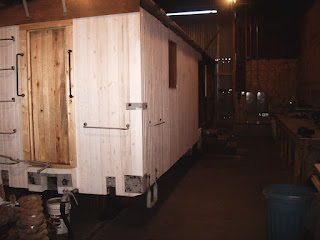 As the siding goes on the hardware is also being reinstalled. Most of the bolts have been replaced, but the vast majority of the hardware itself is original to the car. 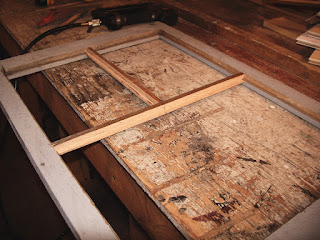 Jerry Huck has been building new windows. When the car arrived from the Sundown & Southern it was found that the original mullioned windows had been replaced with single panes. During the current  refurbishment the original window patterns have been replicated. 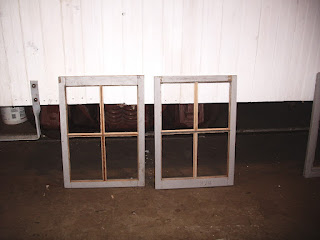 At the Carpentry Shop...

The Carpentry Shop at McEwen was built by volunteers in Baker City and used to restore Heisler number 3 to service. After the locomotive was completed, the shop was dismantled and reassembled at the yards where it was used as an engine house for the number 3 until the backshop was completed. Volunteers from the Sumpter Valley Railroad and the Western Railway Preservation Society have been cleaning up and improving the facility for several years with the intention of making it a useful resource for the restoration and running repairs to the heritage and excursion fleet. 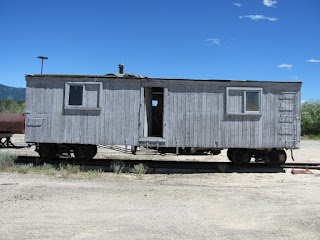 The main project under repair in the Carpentry Shop at this time is Denver & Rio Grande Western outfit sleeper number 04951. This car is owned by the Western Railway Preservation Society and is being rebuilt to full service, as well as being improved for use as crew quarters for the volunteers of both organizations. The above photo was taken in the summer of 2010 and shows the condition of the car prior to restoration. It had lost its original trucks when it was put on the ground as a bunk car in Monarch, Colorado and is seen here temporarily riding on a pair of Stoddard Lumber Company trucks that were originally from the Colorado & Northwestern. 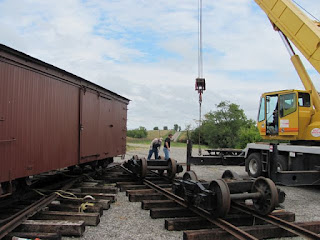 To acquire an appropriate set of trucks for the the number 04951, a trade was arranged with a private collector in Kansas for an original set of Denver & Rio Grande arch bar trucks. In this photo the replacement trucks have have been delivered and are waiting for the boxcar, Colorado & Southern number 8027, on the left to be lifted on to them. 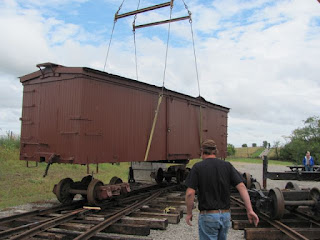 Up off a pair of Denver & Rio Grande trucks. 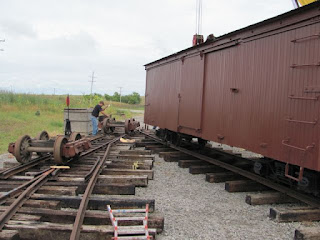 Down on a pair of Colorado & Northwestern trucks. 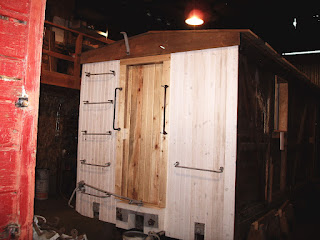 When the original siding was removed, it was found that there was a door in the "A" end of the number 04951. It was decided to rebuild the car with this feature to improve access. The new siding is an exact copy of the pattern used when this car was originally constructed. 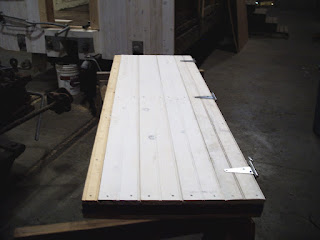 New side doors needed to be constructed as well as the originals were in terrible condition. 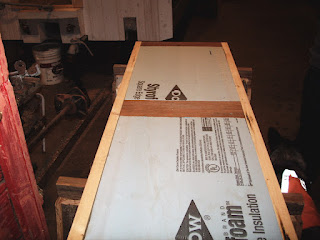 An improvement over the original design is the addition of insulation throughout the car. Not only does it massively improve the overall comfort for people staying in the car, but it also helps reduce fire danger. During the dismantling stage it was found that the only insulation the car carried previously was limestone dust and a few old newspapers. 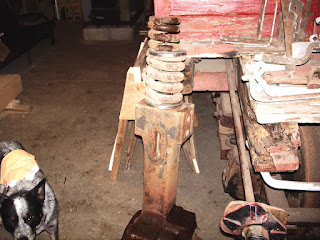 New couplers for the number 04951. This car had what is known as continuous draft gear where the couplers are connected by a rod that runs the full length of the undercarriage. 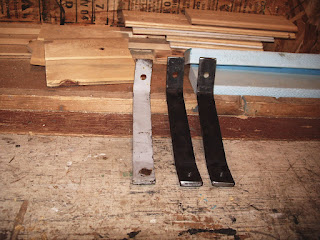 New end brackets for the roofwalks, the one on the left is an original. 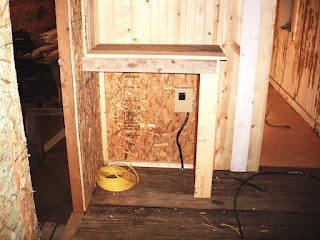 Another improvement is electric lighting and outlets. While the car will retain its historic exterior, the interior is being rebuilt with comfort and utility in mind. However, steps are being taken to ensure that the interior will appear period when completed. 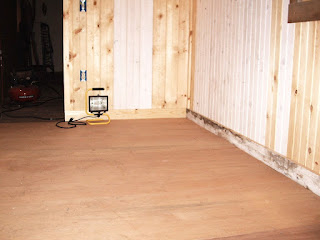 The original boxcar flooring was overlaid before the new flooring goes in.
Posted by Sumpter Valley News at 1:44 PM No comments:

Eric Wunz has finished up the new oak end beam for coach number 20 and on Saturday he, Jerry Huck, Jim Grigsby, and Tom Young finished the final cuts and installed it. 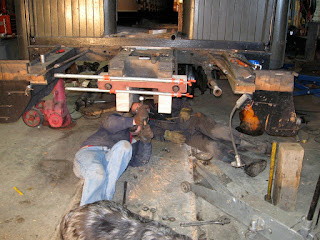 Jerry Huck and Tom Young install the coupler draft gear and sideplates. The red metal object between the cabinet clamps is a new reinforcing plate that not only helps tie the beams together, but is a backing for the two middle truss rods. 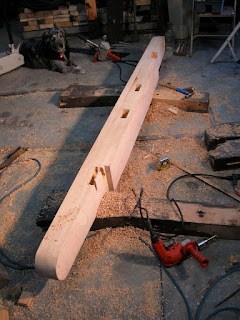 The mortices have been cut and the notches for the platform beams are almost finished. 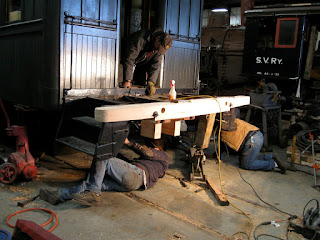 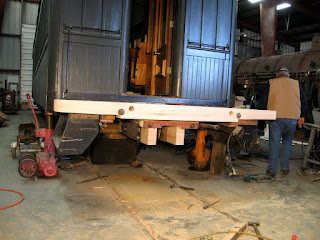 The new end beam is in place and the truss rods have been reattached. There is still work to be done before the coupler, platform deck, and handrails are installed, but thanks to the hard work and dedication of our volunteers, coach 20 is almost back in service.
Posted by Sumpter Valley News at 8:21 PM No comments:

It was decided that when replacing the damaged end beam on Sumpter Valley Railway coach number 20, every effort should be made to replicate the original design as much as possible. During an initial restoration in the 1990s when replacement end beams were installed, they did not follow any specific design and bore little semblance to what would have originally been used on the coach. For the current replacement, historic images of the coach in service were used to create a set of scale drawings as no blueprints for this car are known to exist. 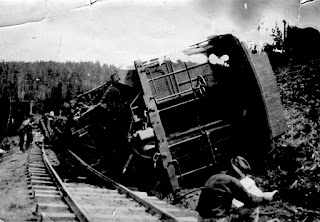 This is the best end on shot of coach 20 in service. It was taken near Dixie in 1910 when the morning passenger train hit some soft track and rolled on its side. 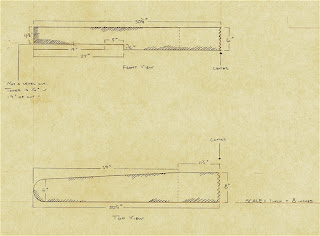 Working with a few known dimensions, Taylor Rush was able to create a basic set of measurements from the above photograph for the replacement beam. 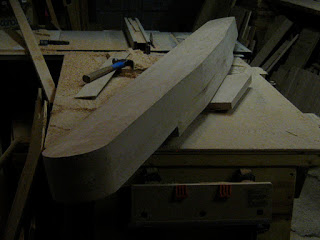 Working with the new dimensions, Eric Wunz went to work creating the new beam out of oak. 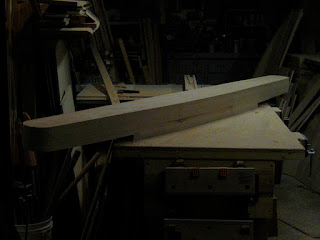 There is still some finish work to be done before the end beam can be morticed and attached to the coach.

Posted by Sumpter Valley News at 3:38 PM No comments: