The repairs to Sumpter Valley Railway coach number 20 have almost been completed. Eric Wunz and Jerry Huck created an almost perfectly matching pair of coach railings from our historic parts inventory.  Along with the now accurate end beam, the railings add greatly to the overall appearance of this 1884 vintage car. It is planned to replace the end railings and beam on the "B" end of the car in the near future. 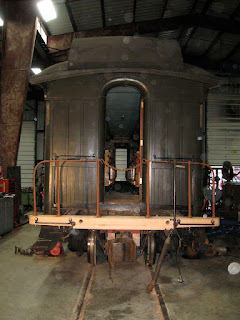 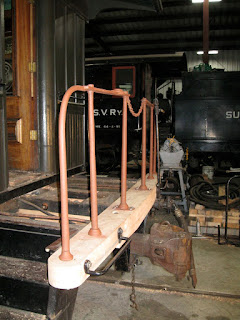 Some modification and repair was needed to make these century old railings safe for regular service. All the primer red parts in this photo are original coach hardware used by the Sumpter Valley Railway. 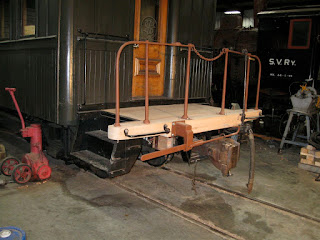 A new cut lever was also fabricated by Eric for coach number 20. As the car no longer carries Janney type couplers with bottom activated mechanisms, a new cut lever was built for the more standard top-pull couplers it carries today. While the cut lever follows no particular historic design but is instead heavily influenced by a design once used on equipment of the Georgetown Loop Railroad. All that is left now is some minor finish work and a fresh coat of paint.

Posted by Sumpter Valley News at 6:34 PM No comments: