Denver & Rio Grande Western RPO number 122 has been moved into the backshop at McEwen for some much needed stabalization and repair. This car was constructed as a baggage car by the Denver & Rio Grande in 1881, and was originally numbered 23. It was heavily rebuilt and upgraded to its current configuration for service on the "Shavano" train, and was later transferred to the "San Juan" when the former was discontinued. Later the car was modified for work train service and was renumbered X122. It was stripped of its passenger trucks which were put under car number 331 for service on the tourist trains of the Silverton Branch. Retired from service it was sold to Don Drawer for use on his private railroad the Sundown & Southern, but it saw only very limited use. It languished in Colorado until it was purchased by the Sumpter Valley Railroad and moved to McEwen in 2001. Current plans call for the car to be rebuilt as a wheelchair accessible loading car with a small limited use restroom being added along with a section for coach seating. The exterior will be rebuilt to reflect the historic appearance of number 122 when it was in service in the 1930s, while the interior will be upgraded, but will still retain much of the original interior siding and other details.

Number 122 in service on the Denver & Rio Grande Western in 1939. When refurbished the car will carry this livery. 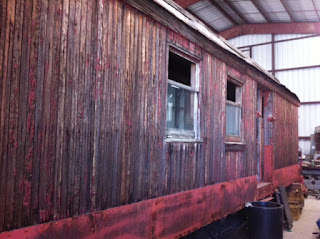 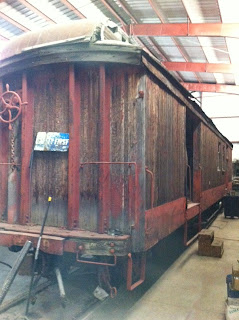 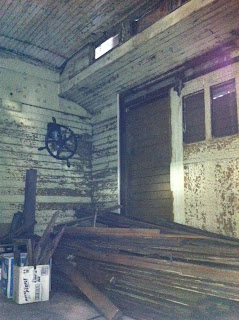 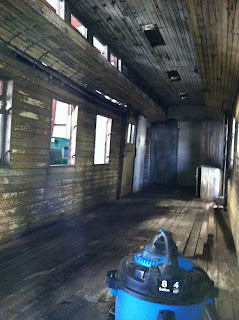 Posted by Sumpter Valley News at 10:39 PM No comments:

When it comes to steam locomotives, work is always underway. On Sumpter Valley Railway Mikado number 19 the disassembly stage of her overhaul is finally complete with the rear section of the firepan coming out to facilitate the installation of the new door sheet sections.Reassembly will begin shortly, and despite several delays, it is still hoped that the big oil-burner will be ready in time for the October photo trains. 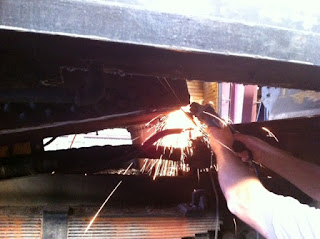 Jerry Huck cuts the rear of the firepan loose so that the upper side section can come off. 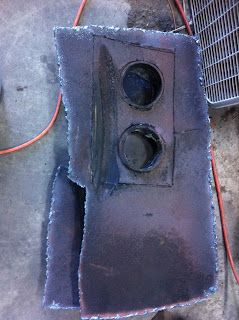 Two sections of the removed firepan showing the draft holes. The large scraped area in the middle of the sheet is where the trailing truck has rubbed against the firepan on tight curves and switches. Sister locomotive number 20 has an inset section in this area to allow the trailing truck more swing. Number 19 will be modified with an indentation as well on the new firepan. 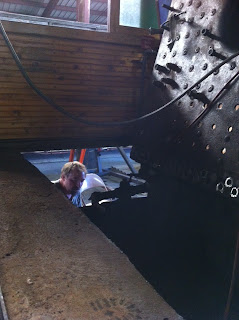 The oak flooring has been pulled and the steel sub-floor of the cab has also been cut out to remove the mud ring rivets. 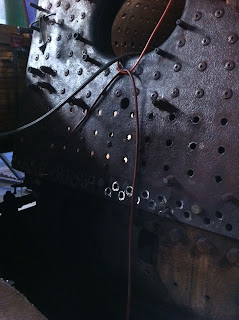 The door sheet on number 19 shows off its missing rivets and staybolts. All of these fasteners will be replaced when the interior sheet is renewed. 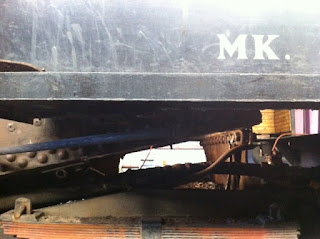 A clear view under the rear of the cab since the back half of the firepan has been removed. 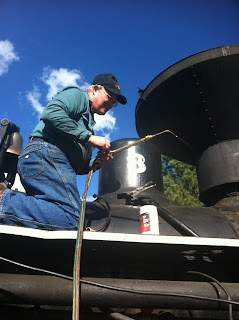 Heisler number 3 has recieved attention as well. Bret Bane is performing some minor repairs to the sander valve which had a broken pull rod connector. 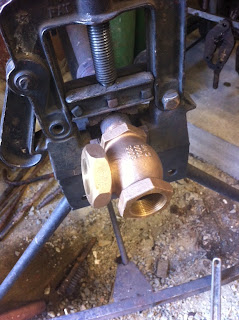 A new check valve for the fireman's side water injector on number 3. Since this photo was taken the engineer's side has also received a new check valve.


Posted by Sumpter Valley News at 10:04 PM No comments: