Heisler number 3 and the almost fully repaired coach 20 have swapped places in the backshop so that work can be carried out on the rear truck of the number 3 prior to the start of season. On Saturday March 31, Jerry Huck, Eric Wunz, and John Rollins made good progress on the 1915 vintage locomotive. 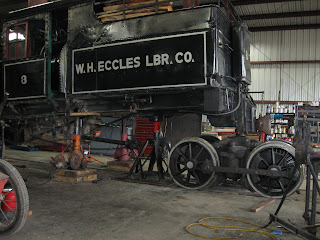 Number 3 has been jacked up and the rear truck has been rolled out for inspection and minor repair. Due to an accident in the 1920's the number 3 has a slight twist to its frame which can result in somewhat uneven wear in the suspension. To help compensate for this, the springs in the trucks are swapped side to side every few years. 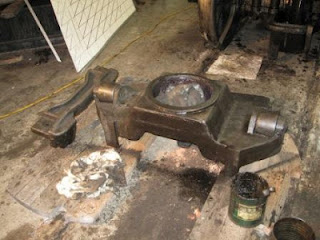 The bolster and side bearing casting rides on the spring packs of the rear truck. 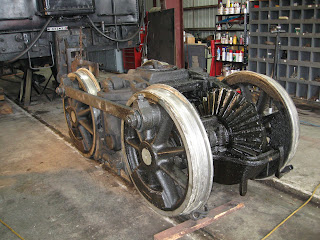 A good view of the bull gear of the rear truck. When built this locomotive was equipped with covers over the gears, but they were likely discarded early in its logging career in an effort to speed up and ease routine maintenance. It was found that several of the bolts that hold the individual sections of the bull gear in place were worn out, so a new set is being fabricated. 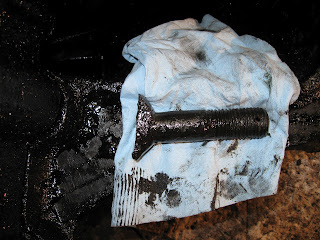 One of the original taper headed bolts from the bull gear sections. 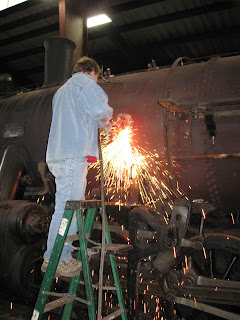 Work was also carried out on number 19. Here Jerry Huck is burning out the rivets on the fireman's side check valve reinforcing plate. A small crack had developed over time, so a new plate will be installed. 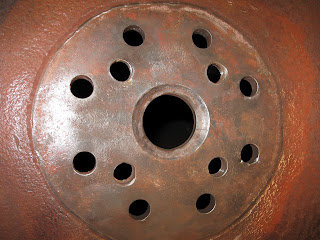 The reinforcing plate on number 19 has been removed, offering a rarely seen view of a usually hidden section of the boiler. 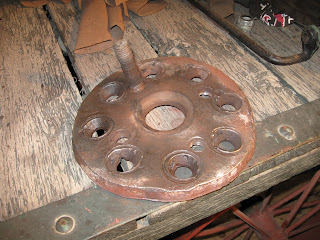 The reinforcing plate from number 19. 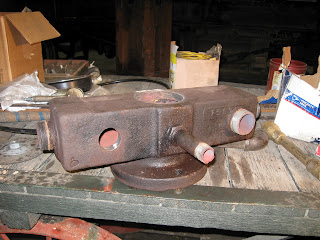 With much effort, John and Eric removed the steam turret from the cab as it will also be replaced. While the original turret was cast, the new one will be welded.

Posted by Sumpter Valley News at 2:19 PM No comments: